One of the requirements of the Marshall Award is to submit a final report of the project. Today, I sent my report to headquarters. While my inaugural leadership tour is history, I hope that there will be other leadership tours, mini-tours, and journeys in my future.

If you want to review my report, click here.  It is also listed on the References page. 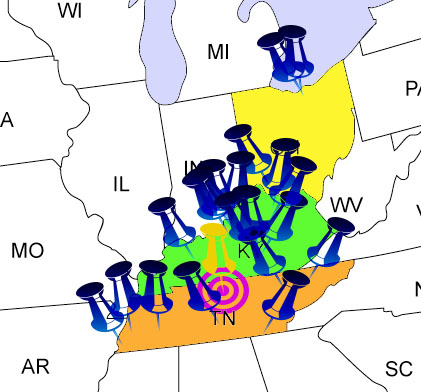 Before I went to Kentucky for the first time, I researched the “must see” sites. All of the reputable sites said a visit to Colonel Sander’s first store fit the category and the restaurant was an historical venue with a museum. Because of this (and having another reason to travel through London and later seeing Cumberland Falls), I scheduled my return to the Nashville airport through these destinations.

As I approached Corbin, KY, I put the museum’s location into my GPS. After many strange turns, I dead-ended in someone’s driveway in a residential section on a hill. So, I found another website and added that location to my GPS. This one took me to an industrial location that was on the south side of Corbin and nearly abandoned.

Then, I searched for another location and followed the GPS to the north side of the town to a small community of Lacy (I think). At this point, I lost my patience. Seriously, this was a small town. How difficult could it be to find Colonel Sander’s museum? I located another online site and drove south (retracing my steps yet again). This time, “my location” was in a busy intersection. I decided enough of this and headed towards Cumberland Falls.

Less then 1/2 mile ahead, I saw a tall KFC sign. There it was (based on photos online). I was so excited to see the museum and taste the Colonel’s chicken made in the original kitchen. Great exhilaration followed by immediate deflation–It was KFC. Just the same options with a few “relics” behind glass. How sad…

Probably one of my best excursions was trying to find Short Creek in Kentucky.  I was told to Google it on a map, and I was shown that it was an easy trip off the main highway between Somerset and London.  Google didn’t find the creek, but I was able to find the road.  First there was a two-lane pave road.  It was Sunday, and I drove by a church in session.  It was a beautiful morning, and I was driving the country road with my windows down.

Further down the road, it became a one-lane paved road.  My Google map did not show a waterway for quite some time, and I wasn’t really paying attention to my online map because I figured the world’s shortest creek would be obvious.  I lost my data connection, and shortly thereafter the homes become less well kept. The road became gravel, but I grew up in rural Oregon, so that didn’t bother me.

It really was a beautiful drive with those cicadas chirping everywhere. About those cicadas, I felt as though I had ringing in my ears most of the time, and I don’t understand how the local people did not hear them. I guess after time, one just tunes it out. Around the next bend, guess what I saw?

Let’s just say that I pulled up behind a pickup right in front of a man’s house. Yup! The road ended right there. He was sitting on his front porch with his dog. I yelled to ask him how to get to Short Creek, but he couldn’t hear me. The dog bounded up. (There were no banjos playing.) The man had to walk all the way up to the car to be able to hear me. He told me that the creek was at the beginning of the road, right after I turned off. How had I missed it? He told me to turn around in his yard, so I did and was on my way.

I was nearly back to the road when I saw a small pullout.  Yup. There’s a creek over there, and it’s reputed to be the shortest one.

There’s water over there

There is a sign, on the other side of the road facing the creek.  Who reads at a 90 degree angle while they are driving?

Anyway, I got out and admired the little creek.  The water was blue and flowed nicely.

This is a college that I learned about during my recent studies. Admission is highly competitive, from what I understand. Instead of students paying tuition, all students perform service. That helps the college, the students, and the community.

The local community includes a lot of art and artistic endeavors. For example, there is a man who is known for making quality dulcimers. Unfortunately, we were there too late in the day to visit his store, His items in the windows were beautiful.

The hotel was very beautiful, and I would like to stay there one day and dine in their restaurant.

It rained just as soon as we arrived. That was nice. It was very different from Oregon rain because it was warm rain that came, poured, and moved on. In Oregon I am used to longer lasting rain that makes everything grey.

I also saw bunnies. They were just running around like they do on campus at the University of Victoria.  I was so excited that I yelled. Unfortunately, I scared Margo who thought she should slam on the brakes for some emergency.

The strangest thing was a truck we were following on the freeway. I guessed that the cargo was 2 big screen TVs with wheels, tires, and large tubes. No one else identified it until we passed.

It was truck axles. I am still not sure what the “big screen”-looking items were.

This was another great group. My presentation was in the morning at the beginning of the one-day boot camp. Participants interacted early in the presentation. They continued to ask me questions throughout the day.

This is a huge lake with a marina on the west side of the highway and the majority of the park on the east side. The highway rises up over the water to allow for boats to pass underneath. Since I am not a water enthusiast, the park didn’t thrill me. There were a lot of bugs that seemed to want to hover in my face. I later heard from two military personnel that a hen and juvenile turkeys were in the area, but I missed them.

The most interesting things I saw were:

The first thing I saw was the welcome sign with a fish on it. I proceeded to Downtown because my online research indicated the architecture was good–it was. I walked around a bit. The time was right before 10am, and many of the stores were not open yet. That was probably a good thing. The courthouse was beautiful, and the statue of the Confederate Soldier looked very worn. In fact, the soldier appears to be missing his entire face. The flora was beautiful, but my knowledge of the plants is severely lacking.

When I returned to the car, I remembered that Dave told me that I had to find the big catfish. My efforts to search online with my phone weren’t too helpful because there was not a specific address given. I headed back towards where I thought the reviewers mentioned (south entrance to the town), and from downtown, I could see that the “big catfish” was the fish I had already seen.

The “big catfish” of Paris, TN

From there, I tried to find the Eiffel Tower. In Paris, France, the tower is dominant in the skyline and easy to locate. Google maps had a more difficult time. The journey took me through a residential area (actually several), and I saw the Paris water tower up close. The setting for the Eiffel Tower replica is in a park near a small swimming pool. It was cute. There was no one around to take my photo with it, and I was in no mood to try the timer on the camera, so off I went.

Leadership Tour
Create a free website or blog at WordPress.com.